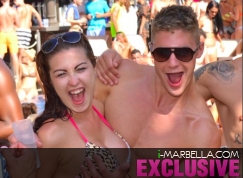 
Scotty T from the British reality show Geordie Shore landed in Marbella to enjoy the hottest pool party of the year in Sala Beach on the 24th of August.

Geordie Shore is a British reality television series broadcast on MTV. Based in Newcastle upon Tyne, it premiered on 24 May 2011, and is the British spin-off of the American show Jersey Shore."Geordie" is the regional nickname and dialect given to the people of the Tyneside area of North East England, and is closely associated with the city of Newcastle upon Tyne and its environs where the show is set. However the show includes cast members from various parts of North East England.

Scott Timlin, with a nickname Scotty T joined the Geordie crew in series 4 and started an immediate bromance with Gaz, leading to the formation of the Buck Squad and giving Gaz a run for his money in the pulling stakes!  A former Club Promoter from Newcastle, Scott describes himself as "the life and soul of the party" and like the rest of the Geordie lads, he prides himself in looking mint at all times, regularly hitting the gym and obsessively ironing his clothes. Although a late addition to the house, since joining Geordie Shore, Scott has fast become an integral part of the Geordie crew, loved by both the lads and lasses of the house. He definitely showed his love of partying and fun at Sala Beach's Pool Party on Sunday! He also tweeted several times about Marbella and Sala Beach and about the rapper Kano being there. Take a look at the exclusive photos below.

Hottest Pool Party of the Summer at Sala Beach with Celebs