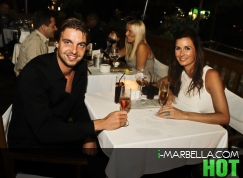 Timothy Michael "Tim" Krul (born 3 April 1988) is a Dutch footballer who plays as a goalkeeper for Premier League club Newcastle United and the Netherlands national team. In his home town he is known as "Bakkers Handen", which roughly translates to "Baker's hands", in reference to how 'safe' his hands are in goal. This is not the first time Krul has been seen in La Sala Marbella, he was also seen there in August when he was on a night out with his friends.