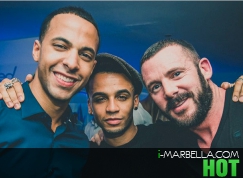 JLS (an initialism of Jack the Lad Swing) was a British boy band consisting of members JB Gill, Marvin Humes, Aston Merrygold and Oritsé Williams. They were the runners-up of the fifth series of the ITV reality talent show The X Factor in 2008, coming second to Alexandra Burke. Following their appearance on The X Factor, JLS signed toEpic Records.

Their first two singles "Beat Again" and "Everybody in Love" both went to number one on the UK Singles Chart. As of 2013, they are the sixteenth richest reality TV stars in the UK, with an estimated fortune of £6 million per member, totalling £24 million. JLS have sold over 6 million records in the UK alone and more than 10 million records worldwide.

JLS officially split up following the final gig of their Goodbye Tour at The O2 Arena in London on 22 December 2013.

Ex JLS star JB Gill has been engaged to his girlfriend Chloe Tangey since January. Three months after the official announcement, his former band-mates Marvin Humes and Aston Merrygold flew out to Marbella to help celebrate his last days as a single man. The boys were also seen partying in Sleek Nightclub, Puerto Banus. See the gallery of their party below!