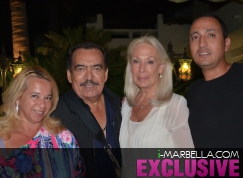 He has composed hundreds of songs and been a regular staple on the top-40 charts in Mexico since his career began in 1977. His music is a mixture of Latin pop, ranchera and grupera music. His success is not only found in music but also in his short acting career when he became the main protagonist of a Mexican soap opera. In 1996 he made his acting debut in the Mexican soap opera Tú y Yo (You and I) sharing credits with Maribel Guardia (his former wife and mother to one of his sons) the soap opera became an instant televised hit. He has won seven Latin Grammy Awards and four Grammy Awards.

This new Mediterranean gastronomy venture is located in a luxurious environment. What used to be the well renown Trader Vic’s in Urbanizacion La Alcazaba, Puerto Banús.  Marvellous Gardens next to the Beach are the perfect setting to savour the exquisite flavours brought to you by our very own Chef Fredderic Lapouye. His knowledge in international cuisine and prior experience in Puerto Banús guarantee the success of the Zayni restaurant cuisine.

The team is completed with a popular restaurant director in Costa del Sol, Nono and Denise Matthews, well recognised public relations on the Costa del Sol and Manuela Venuto, the head waiter reference in establishments directed at quality tourism. In order to achieve the Zayni unbeatable experience, we rely on the Cocktail Guru Giorgio Sarinini, who will offer everything he has learned from his experiences working at Blue Marlin, Ibiza; Olivia Valere, Ocean Club and Nikki Beach Marbella & Thailand.

A team of professionals joined together to make Zayni Restaurant a winning experience accessible to all.  Not in vain our value for money is one of the strong points of our restaurant concept.

Where can you watch World Cup Games in Marbella?