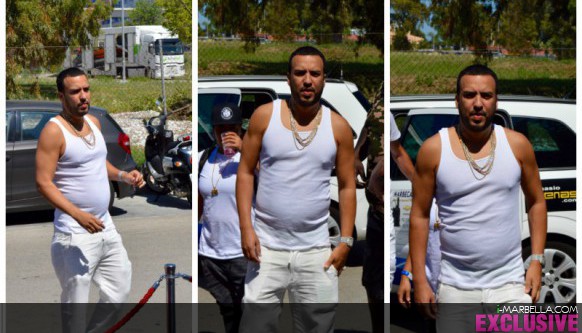 
French Montana's performance at Cavalli Club Puerto Banus was postponed due to technical reasons, and the star smashed the place on Monday instead of Sunday.

On Tuesday, French Montana was spotted at a party at Sisu Boutique Hotel.

Karim Kharbouch (born November 9, 1984), better known by his stage name French Montana, is an American rapper, entrepreneur, former videographer, and hip-hop socialite. Born in Morocco, his family emigrated to the US when he was 13 years old. He is the founder and CEO of Cocaine City Records. In 2012, he signed a joint venture recording deal with Bad Boy Records and Maybach Music Group. Montana has been known for his frequent collaborations with producer Harry Fraud, and with rapper Max B before his conviction. More recently he is known for his collaborations with Rick Ross, Diddy and his MMG and Bad Boy label-mates along with his Coke Boys which include the late Chinx, Lil Durk and his brother Zack. He made his mixtape debut in September 7, 2007, and released his debut studio album Excuse My French on May 21, 2013.

Sisu Boutique Hotel is a contemporary surrounding adorned with modern furnishings with touches of retro nostalgia.

By day, party with Sisu Boutique Hotel at one of the Exclusive Pools or Rooftop Events.

By night, chill out at the 24-hour bar and restaurant, or, alternatively, keep the party going all night at the exclusive nightclub restaurant.

Every Friday, Sisu Boutique Hotel invites you to an extravagant Pool Party. On Saturdays, welcome to our Rooftop Party!