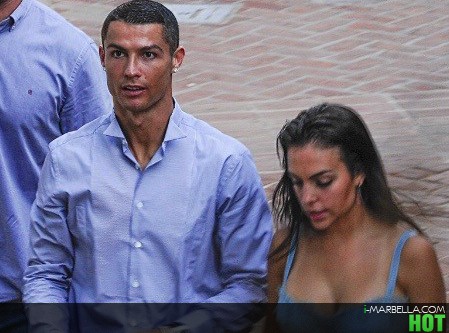 Cristiano Ronaldo and his girlfriend Georgina Rodriguez had a date night out in Marbella, Spain May 30, 2018 Source: I-Marbella.com

The Real Madrid soccer star enjoys in Marbella his vacation days before joining the Portuguese team to play the World Cup in Russia. Cristiano Ronaldo and Georgina Rodriguez enjoyed a date night out in Marbella stopping by the Nobu Marbella (new's Robert De Niro restaurant) for a bite to eat with a group of friends on Wednesday.

Ronaldo who recently won his fifth European title on the weekend, as Real Madrid beat Liverpool 3-1 in Kiev, and enjoyed dinner in the Marbella sun as a treat.

The couple dined at the upmarket Nobu restaurant, which is owned by legendary American actor De Niro and is located near the popular Golden Mile.

Cristiano and Georgina enjoyed the cuisine of one of the country's leading chefs, Dani García.

Informally attired -Georgina with a low-cut and tight turquoise dress- and protected by a large escort, they settled in the restaurant reserved for the chef from Malaga, who has just released a menu called "Arcadia" with which tribute is paid to the flavors of Andalusia: seasoned nitro olives, white garlic and plum, pickled ‘gazpacho’ of beet or consomme detail, chop and smoked eel skins, among other dishes.

At the time, Ronaldo was likely privy to the huge news that his boss Zinedine Zidane was preparing to stand down as Real Madrid manager after three very successful years.

Ronaldo took to Instagram on the day of the announcement, where he paid tribute to the Frenchman, writing: "I'm just proud to have been your player. Mister, thanks for so much."

Real Madrid fans still waiting for the champ to clarify his professional future: regarding his continuity in the ranks of Real Madrid after Cristiano Ronaldo controversial declaration doubting his abidance in the club.

Ronaldo is now reflecting on his future, and he chose nothing better than an environment surrounded by all kinds of luxuries to disconnect from the madding crowd and to take a decision calmly. Cristiano Ronaldo his family landed at the Malaga airport on Tuesday to head to Marbella where they enjoy a few days of vacation before joining the Portuguese national team on Monday.

During his previous visit to the city he opted for an excellent place, Hotel Marbella Club, this time he has taken a step beyond renting a luxurious mansion, it's known that he's planning to spend time with his family and friends in 'La Zagaleta', which is considered the most exclusive urbanization in Europe, located in the municipality of 'Benahavís' near from Marbella. Cristiano has rented two villas and has reserved catering for 15 people, among whom is believed to be his agent, Jorge Mendes.

Since his arrival, Ronaldo, Madrid star has been watched hanging out with his couple, model Georgina Rodriguez, who has been for offering details about this little trip through Instagram. His oldest son has also been seen. Last night's plan began with a visit to Puente Romano.

The last visit to Marbella took place just a few months ago, in January of this year. Then the couple traveled to celebrate Georgina's birthday. The weather wasn't that good since they faced a storm that spoiled the party. Now they give another shot this time, with good weather and more desire to enjoy. Apparently, the Portuguese star has scheduled for the last day, a party that will be attended by no more than a twenty guests. Their names, at the moment, are classified.

Is that Vladimir Putin's new villa in La Zagaleta? (4)