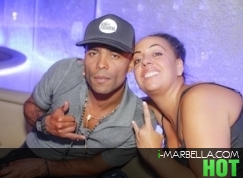 The sports star, who is currently visiting Marbella with friends, was spotted in the club on the weekend. The night began with a few quiet drinks until Ashley saw a group of Saudi Arabians sitting across from him ordering large quantities of champagne, this kick started a champagne war where the two groups tried to out do each other by ordering larger quantities of champagne. This then followed by 2 two groups spraying the champagne at each other. Ashley ended up returning to the club the following night where the same thing happened again.