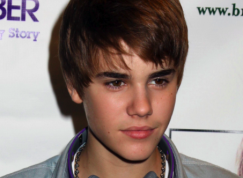 
Justin Bieber is no longer the 12 year old girl we all fell in love with. He's going through puberty and his voice is starting to sound super awkward.

When regular kids go through puberty they just have to suck it up and deal with the embarrassment. But when you're a zillionaire like Justin Bieber you hire people. Pub people.

A source told the News Of The World newspaper: “Justin is physically developing at a slower rate than most guys so his voice is only breaking now. He’s working with the best in the business, a specialist called Jan Smith, to make sure he gets much vocal rest as humanly possible for a working pop star. It’s the same people who worked with Usher when his voice broke.