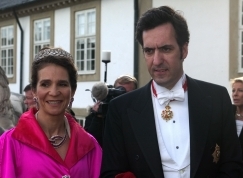 Two years after announcing that they were “temporarily ceasing cohabitation”, the King of Spain’s oldest daughter, Princesa Elena, and her husband, Jaime de Marichalar, have reportedly initiated procedures to permanently dissolve their marriage.

The couple has carried out the process in this manner, so that their two children Felipe Juan Froilan, aged 11, and Victoria Federica, aged nine, could get used to their new family life. The children lived with their mother in a large apartment in Madrid, and frequently saw their father who continued to live in what was the family home. It is also possible that the couple considered reconciliation, but as this has not been possible, they are now filing for divorce.

Jaime de Marichalar, currently the Duke of Lugo, has not been present at official events since November 2007 and once divorced will not maintain his title.