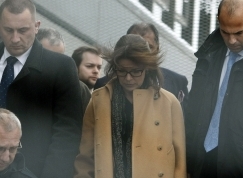 
Princess Caroline of Hannover appeared in a German court today to testify as a witness in her husband’s trial. The Princess took the stand to give her testimony on what happened back in 2000 when Prince Ernst August assaulted a nightclub owner in Kenya.

After saying a few brief words in German, Caroline went on to speak in English. She testified that her husband “gave two slaps with the hand flat. And he said, one in the music, the other by the lights.” She also said Ernst August met the nightclub owner at a “chance meeting” on the beach.

After two hours on the stand, Princess Caroline left the court looking serious and not even glancing at the audience.

Her appearance in court was a media frenzy, as it has been a week since Ernst August was photographed in Thailand kissing another woman. Caroline and Ernst have not been seen in public together since June, and rumors are abundant that a divorce is in the works.

The Prince was not present in court today.