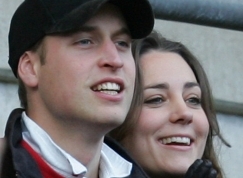 
Queen Elizabeth sent letters to newspapers warning against the publication of paparazzi photographs or she will take action against intrusive cameramen. But it midght is all just a  smokescreen to prepare for a much bigger news.

Royal insiders are convinced that Prince William will propose to his girlfriend at Christmas and tie the knot with Kate Middleton next summer.

Paddy Harverson, a spokesperson for the queen's son Prince Charles, said: "Members of the royal family feel they have a right to privacy when they are going about everyday, private activities. They recognise there is a public interest in them and what they do, but the do not think this extends to photographing the private activities of them and their friends."

Ingrid Seward, editor-in-chief of Majesty magazine, said: "I think William is behind this. I think he is setting some ground rules for his future with Kate." Other palace insiders claim an engagement before the end of this year will lay they groundwork for a wedding next summer.

The insider told Britain's Daily Star newspaper: "This issue with the paparazzi at the Norfolk estate is all a bit of a smokescreen really. It's a bit like the royals are saying: 'Behave your-selves and you will get your wedding next year.'"

A spokesperson for betting outlet William Hill said: "A group of our customers have interpreted the Queen's decision to crack down on the paparazzi as a clear sign that she expects extra activity over the Christmas period, which can only mean a royal engagement."