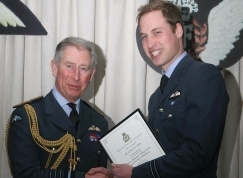 
Britain’s Prince William finally received his RAF wings on friday. William recently completed a year long course in becoming a search-and-rescue helicopter pilot, something that has been a dream of his for while.

The Prince brought his father, Prince Charles, and stepmother Camilla, Duchess of Cornwall, to the ceremony. Also there was William’s longtime girlfriend, Kate Middleton and her family. Cameras caught the couple chatting and Kate rubbing her boyfriend’s back right before the ceremony began. It was William’s father who gave the wings to him.

Next for the Prince will be another training course in Wales beginning later this month. But first, he will travel to Australia and New Zealand for an official tour starting next week. I will keep you posted on that as the tour might demonstrate what sort of future the British monarchy has Down Under.