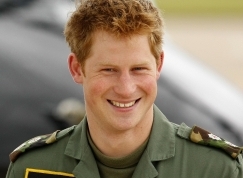 
Britain's Prince Harry (25) has splashed out £20,000 on a booze cruise in Africa. The royal family member and a host of his pals jumped aboard a houseboat, which was full of crates of beer and cigarettes, as part of his belated birthday celebrations.

A source said: "He now has a short gap in training and has persuaded a group of friends to join him on a belated birthday treat."

The ten-day trip, which includes cruising down a crocodile-infested delta, has been described as Harry's first "real break" for ten months as he has been busy training to become a helicopter pilot.

It is the same boat Harry chartered in Botswana last year when he took on/off girlfriend Chelsy Davy cruising.

Meanwhile, sources claim Harry is determined to win Chelsy back, planning a romantic New Year break at an exotic safari lodge in Botswana.