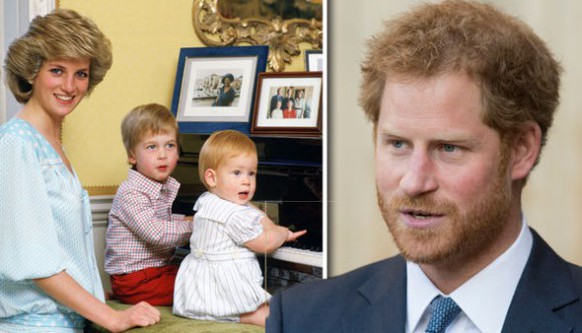 Prince Harry has revealed he thinks his mother is "looking down with tears in her eyes" because she is so proud of him and his brother.

The Royal said that he and Prince William will do "everything we can" to make sure Princess Diana is never forgotten by continuing her charity work.

He said that he "can't wait" for the day he becomes a father and that he felt his mother was "longing" for him to make her a grandmother again.

Harry also revealed that during his 10 years in the military he saw the Queen as his "boss" even though she was his grandmother -- and acted as such around her.

Speaking to the ABC News breakfast show Good Morning America, Harry opened up about how he and his brother try to honour their mother’s legacy as a humanitarian.

Harry has played his part by founding his own aid charity, Sentebale, and continues to be an integral part of the Halo Trust, the anti-landmine group his mother worked with when she was alive.

He said: “We will all do everything we can to make sure that she’s never forgotten and carry on all the special gifts as such that she had when she was alive.

“I hope that a lot of my mother's talents are shown in a lot of work that I do.

Harry was interviewed in Kensington Palace in the room that used to be his mother's sitting room.

He said: “She had a study through there with her desk where she used to listen to all of her crazy music.

“It took a little bit of getting used to.”

Asked by host Robin Roberts how his mother would feel now about him and his brother, he said: “She's looking down with tears in her eyes being incredibly proud of what we've established, I suppose.

“I'm sure she's longing for me to have kids so she can be a grandmother again.”

Harry said that he hoped everything he did privately and publicly ‘makes her proud’.

He said: “Losing your mother at such a young age shapes your life massively, of course it does, and I find myself trying to be there and give advice to other people who are in similar positions.”

Miss Roberts asked Harry about his playful nature and Harry admitted that it is part of who he is.

“...I've got a kid inside me. I want to keep that. I adore kids, I enjoy everything they bring to the party.

“Everyone needs a hug every now and then. I've been told over and over again I'm very good at giving hugs. Which is great. I would choose hugging over shaking hands most of the time.”

Miss Roberts asked if Harry wanted to have children one day and he replied: “I can't wait for the day. It will be fantastic.”

Harry served in the military for 10 years including a 10 week tour of Afghanistan which was cut short when his location was revealed by a US website.

He said that being in the military shaped his view of how he saw The Queen.

He said: ‘Because of my time in the service, (I have) the utmost of respect I have for her not just as a grandmother, she was my boss for 10 years and I viewed her very much like that.

“Now it's nice because I can go to her for advice and bend her ear of the experience she’s had over the years.”

Harry said that when he was in the Army he wanted to be just known as ‘Captain Wales’ and ‘treated the same’ as other soldiers.

But he admitted that there was an ‘acceptance’ he was different and said: ‘The power that the name has…’

Harry spoke out ahead of the Invictus Games in Orlando, Florida. He founded the competition in 2014 to give wounded veterans a chance to compete in a Paralympics style contest.

He said: “Weirdly she (Diana) went with me my first time to Florida, to Disney World.

“It's one of my very very happy memories.

“I went on Space Mountain 14 times. That’s the best thing ever.

“There's all sorts of places over the world where we were very lucky to have those moments with our mother. Very very happy memories.”

Afterwards Miss Roberts paid tribute to Prince Harry afterwards and said that "watching him is like watching his mother".

She said that many viewers had contacted the programme to say that they reminded them of Princess Diana.

In the first part of the interview screened on Thursday Harry revealed that he was "broken" after being forced to leave his unit in Afghanistan in 2008.

He said that he felt like he was betraying his men and said to himself: "I'm an officer, I'm leaving my soldiers."

Dignity for Diana at Last: Princess's Grave to be Overhauled