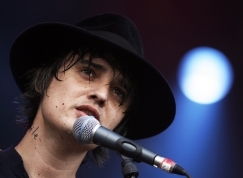 
The Babyshambles musician had been due to perform a number of concerts in Ireland but cancelled the shows at the last minute with his management claiming he was "exhausted", but Pete has now revealed his condition was far more serious. His heart stopped.

Pete said: "If I hadn't been on a life support machine I'd have been in Ireland. But my heart stopped."

Pete - who was immediately rushed to Great Western Hospital in Swindon after becoming ill at home - is adamant it wasn't his drug use or hard partying lifestyle which caused his condition.

"I don't remember. I was running into the walls, making steering wheel signs with my hands. And then I just... stopped. My body just stopped."

The 30-year-old rocker - who has been repeatedly arrested for drug offences, for driving under the influence and car theft - has made several attempts over the years to overcome his addictions.

Pete says he is now back to full health and is set to rejoin the Babyshambles for a UK tour in December because it's "just what the doctor ordered".