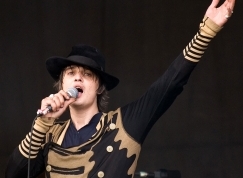 
Pete Doherty has been arrested in Germany for smashing the back window of a car.

The Babyshambles frontman was taken into custody for throwing a pint glass at a car - believed to be parked at the time - outside of the bar Trinkteufel (Drink Devil) in Berlin shortly before 7am on Saturday morning. According to German newspaper Bild, Pete had been thrown out of another bar a short while earlier, and upon arriving at Trinkteufel had been asking staff where he could buy some drugs.

Pete was taken to a police station where he spent the next three hours. He was booked for property damage and released.

Pete recently finished a tour of Germany during which he attracted controversy by singing the banned first verse of the German national anthem, which begins "Deutschland, Deutschland uber alles", at a Munich music festival. The first two verses of the song have been outlawed since the end of World War II because of its use during the Nazi regime by Adolf Hitler and its reference to racial superiority.