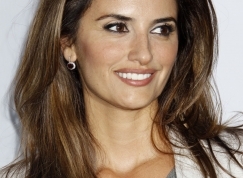 
Actress Penelope Cruz and her fiancée Javier Bardem are so determined to help the victims of earthquake-ravaged Haiti, they have pledged $50,000 a year until 2015 to help rebuild the country's schools.

Cruz, Bardem and British writer/director Paul Haggis held a charity celebrity brunch on Sunday in Los Angeles to announce their very special plan. About a 100 guests, including Nicole Kidman (who donated $250,000), Charlize Theron, Maria Bello and Gerard Butler showed up to the brunch, where they were treated to a performance by Sheryl Crow, reports People magazine.

They reportedly raised $4.5 million dollars that afternoon to help the children of Haiti.