Paula Abdul Wants to Be the Next Oprah 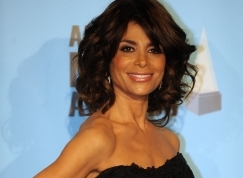 
Now that Oprah is throwing in her hat as the queen of daytime, her position is up for grabs! Paula Abdul is reportedly ready to step up to the plate! She says she’s developing her very own talk show and would like to have it on the air within the next couple of years.

She tells Extra, "I have really great ideas. My show would be fun and quirky and it would be insightful. It would be fun to jam with the band and have amazing guests and introduce amazing different formats on the show."

Paula thinks she has what it takes to connect with her guest and with her audience members. "I feel I would be really good at it. I have the ability to connect with people on a level," Abdul explained. "I've proven to pierce the heartstrings, but also to be celebratory and bring out the best in people."

Despite wanting to go into the same line of work, Paula also maintains a high level of respect for Oprah and the empire she built after so many years on television. "Oprah broke barriers and let the path for other women to be empowered." She added, "Like 'American Idol,' there's a place and time that makes history. That's Oprah."