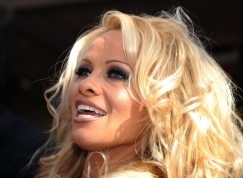 
Pamela Anderson is house-hunting in London.

The former 'Baywatch' actress is considering purchasing a £4 million property in the plush area of South Kensington, which is close to the British capital's main museums, to use as a base when she works in the UK.

A source told The Sun newspaper: "She has fallen in love with South Kensington and the way of life. She is interested in history and arts. She's considering an offer on a four-bed by the museums."

In addition to a London base, the 42-year-old star - who has sons Brandon, 13, and Dylan, 11, with ex-husband Tommy Lee - is also looking for a second property on the English coast, with Bournemouth, Blacpool, Brighton and Morecambe Bay all possible locations.

Her agent, Toby St Just, said recently: "She loves it in England and is looking at buying two houses, one in London and one by the sea. "It'll be a far cry from California, where all the people are tanned and beautiful. And she may find the pebble beaches take a little getting used to.

"But she has a real affection for the place and would love to have somewhere she can call home. "She hasn't decided where yet, she's still looking at the options."

Former Playboy model Pamela - who is currently competing in US TV talent show 'Dancing with the Stars' - stayed in London over the Christmas period, when she starred as the genie of the lamp in a pantomime version of 'Aladdin'.