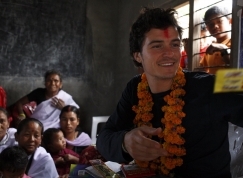 Hollywood actor Orlando Bloom was given the title of UNICEF Goodwill Ambassador monday by the United Nations Children's Fund in recognition of his work and commitment to the rights of children around the world.

The 32-year-old actor told FemaleFirst he looks forward to working with UNICEF as they continue to make the world a better place for children. The "Pirates of the Carribean" star has worked with the organisation since 2007, when he travelled with them to visit schools in poor areas of Nepal. He returned to the area in 2008 to monitor what work was being done to improve the cleanliness of drinking water in the region.

"UNICEF doesn't just deliver humanitarian aid, which is what they are known for all over the world. They also educate and provide tools which help women and children face challenges specific to their own lives," said Orlando. "I look forward to learning more and to supporting UNICEF anyway I can."

No more Pirates for Orlando Bloom (1)