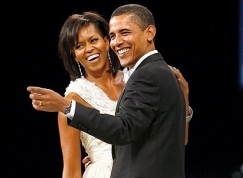 
President Barack Obama and Jennifer Lopez led the dancing at a star-studded celebration of Latin music at the White House yesterday. The U.S. leader took to the stage with his family, where they boogied alongside A-list stars like Jennifer Lopez, Marc Anthony and Gloria Estefan.

The U.S. leader wiggled his hips and took a few turns on the dance floor with singer Thalia after she asked: "Mr President - with all due respect - will you dance with me?"

According to OK! magazine, he later joined the action on stage with his wife Michelle and daughters Sasha and Malia, who danced with their parents and had a go on the drums.