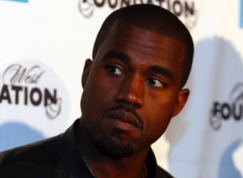 
Kanye West is the latest celebrity to fall victim to a nude scandal.

Kanye reportedly dropped his pants and snapped photos of his privates and sent the photos to numerous women. And those photos are now being shopped around, according to Radaronline. One image shows a nude Kanye from the chest up, wearing sunglasses and a gold chain, while the second photo shows the singer's privates intentionally exposed from his boxer briefs.

"These pics have been floating around since he hit so many girls up on MySpace," according to the source of the images. "He probably sent them to many, many women."

He must have felt pretty confident about his package to snap these photos and send them out to women, so we're assuming he won't be embarrassed if they leak online. It's still pretty gross that he took the photos himself and sent them to a bunch of women!