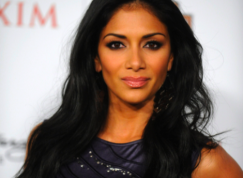 The Pussycat Dolls singer - who reconciled her two-year romance with Formula one driver Lewis Hamilton in February after a brief split - admits she ignores her lover's advice when she is behind the wheel, leaving him more worried than when he is competing in a dangerous high-speed race.

She said: "He's more afraid when he's with me and I'm driving than he is during a race. He gives me pointers, but at the end of the day he's like, 'Babe, you're driving with your knees!'I'm doing my makeup, changing the radio. I guess it's appropriate that I just did a song with Slash and Alice Cooper called 'Baby Can't Drive.' "

The 31-year-old star also admitted she has a crush on actress Halle Berry. She added in an interview with Maxim magazine: "She's just naturally gorgeous.I love her smile. Wait, I sound like a dude; I've got to snap out of it!"

The Pussycat Dolls recently unveiled a new line-up, with Nicole left as the only original member. She is joined by Kherington Payne, Rino Nakasone-Razalan, Vanessa Curry and Jamie Lee Ruiz, but thinks their new material will still feature her at the forefront. She explained: "A couple of the girls have left the group, but I'm still the lead singer, and I'm still working on music right now. I think the next single will be under my name."

Nicole Scherzinger is in Marbella!