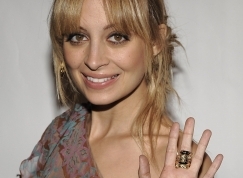 
Nicole Richie is preparing to launch an acting career as the star of a new TV sitcom.

The former Simple Life star is returning to the small screen for a half-hour show, which she pitched to bosses at US network ABC.

The mum-of-two will produce the series, in which she'll star as a working woman juggling her family and love life, reports Daily Variety.

It's not the first time the 28-year-old has tried her hand at acting - she's notched up guest appearances on TV hit "Chuck", as well as "8 Simple Rules" and "American Dreams".