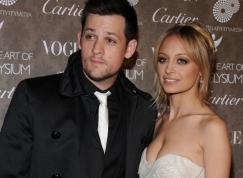 Reality show star Nicole Richie (28) and Joel Madden (30) have reportedly tied the knot in a secret ceremony. According to OK! magazine, the couple - who celebrated the birth of their second child last month - were married in an intimate service on Wednesday.

A source said: "Nicole has never been in a rush to get married to Joel. She's so happy with him and their little family that she didn't feel the need to change the way things were between them.

"But when her good friend Adam (Adam Goldstein aka DJ AM) unexpectedly died, she freaked out. She realised life is fragile and short. She doesn't want to have any regrets at all, and she does want to be Joel's wife."