Nicole and Joel getting married! 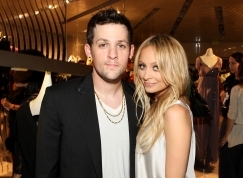 
Although the rumours of Nicole Richie and Joel Madden getting married have been around for some time now, the couple confirmed they are really going for it! Obviously, it took becoming a mom for Nicole Richie to decide she was ready to be a wife as well.

Richie (28) revealed that she was engaged to Joel Madden Monday night while taping a Late Show with David Letterman appearance set to air Friday. When Letterman asked if she and Madden (30) were married, Richie responded, "We're not," but added, "We actually recently got engaged."

Richie and the Good Charlotte singer began dating in 2006 and have daughter Harlow (2) and son Sparrow (5 months). "When you have the kids," Letterman asked Richie, "everything changes, doesn't it?"

"It sounds cheesy to say, but it does," Richie said. "Your whole life changes and your priorities change 100 percent ... in the best way possible."

Lionel Richie as the father-of-the-bride can´t be happier: "My happiness for Nicole and Joel knows no boundaries," Richie (60) told People magazine. "They have given me two beautiful grandchildren and have proven to be great parents. I am not sure who is luckier, Nicole and Joel to have each other, or me, to have both of them in my life," he says. "I cannot wait to give away the bride!"