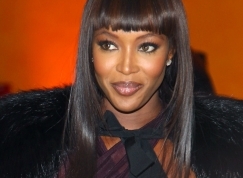 
Naomi Campbell is reportedly in talks to become a host of a reality modelling show that sounds a lot like America’s Next Top Model.

But Tyra Banks shouldn’t be too threatened—Naomi’s show would air in the UK. According to The Daily Mail, she’s currently in negotiations to host an X-Factor style show. A source says, "Naomi has been approached with an offer, which we are talking about and discussing. An initial approach has been made. We are discussing that offer, but nothing is set in stone yet."

Naomi would play the same type of role as Tyra does here, coaching the amateur models through the process each week. The show may also involve Simon Cowell and his partner Sir Philip Green and supermodel Kate Moss in some capacity.

Naomi Campbell Wants To Get Pregnant