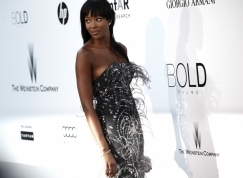 
Naomi Campbell will be subpoenaed to testify in a war crimes case.

The 40-year-old supermodel will be asked to explain claims she received a “huge, uncut” ‘blood diamond’ from former Liberian President Charles Taylor during a party held at former South African President Nelson Mandela’s house in September 1997.

Actress Mia Farrow – who has also been called to trial — claims the model personally told her about the precious stone. Speaking from The Hague where a war crimes trial against Taylor is underway, a court spokesperson said, “What it is going to happen now is just a matter of when it happens.” Naomi has repeatedly refused to answer questions for the special court. In April, Naomi reportedly grew visibly agitated when asked about receiving a “huge”, uncut “blood diamond” from the dictator.

“I didn’t receive a ‘blood diamond’ and I’m not going to speak about that,” she said. Taylor has been on trial since 2008 for crimes against humanity, after a bloody campaign he waged in Sierra Leone between 1997 and 2001, during which time he is alleged to have been involved with ‘blood diamonds’.

A ‘blood diamond’ — also called a ‘hot’ or ‘war’ diamond — is a jewel mined in a war zone and sold to aid warlord activity or invading forces’ campaigns.

Naomi Campbell Wants To Get Pregnant