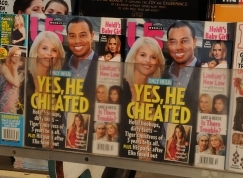 
Tiger Woods has stayed relatively mum about his recent car accident and accusations of an affair - until now. The pro golfer just released statement talking about how he let his family down and how he regrets his actions. But several other mistresses have shown up also.

Tiger writes in his apology statement: "I have let my family down and I regret those transgressions with all of my heart. I have not been true to my values and the behavior my family deserves. I am not without faults and I am far short of perfect. I am dealing with my behavior and personal failings behind closed doors with my family. Those feelings should be shared by us alone /.../."

But we don´t think his wife Elin Nordegren will accept it, because few other women have said having sex with Tiger. The latest woman involved in the Tiger Woods scandal is Kalika Moquin, who is the marketing manager for The Bank nightclub in Las Vegas. A source close to Kalika revealed that she did have a sexual relationship with the golf star. "Kalika was bragging about how they were seeing each other and hooking up," Kalika’s friend confirmed to Hollyscoop.

Meanwhile, Tiger Woods' wife Elin Nordegren may have sat quickly in the sidelines for years without making a peep, but when it looks like she's a feisty little wifey after all. Elin reportedly confronted Tiger's mistress Jaimee Grubbs after she realized Tiger was making a lot of calls to a mystery number.

On the accident night, Grubbs got a phone call from a blocked number and when she answered she realized it was Elin. According to TMZ, Elin didn't identify herself by name but said, "You know who this is because you're f**king my husband."

You can listen to the voicemail HERE.