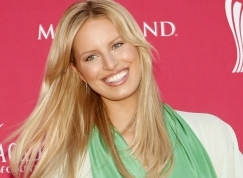 The birth comes just two weeks after Kurkova celebrated at her baby shower with actress Michelle Monaghan and fellow Victoria's Secret models Alessandra Ambrosio and Adriana Lima (who is also expecting) in N.Y.C.

"She looked amazing at her shower and she's super excited," Ambrosio told People magazine at the launch of Victoria's Secret Beauty Velvet after the shower.

Ambrosio, who had a daughter last year, says the Victoria's Secret models are baby crazy. "It's just great that we're all at the same time in our lives. We're all having babies, we're thinking about play dates. We're going shopping for the babies!" she says.