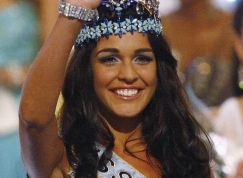 Relative unknown Kaiane Aldorino, who was representing the British Overseas Territory of Gibraltar, scooped the beauty prize. She beat early favourite Miss Puerto Rico at the ceremony held in Johannesburg.

The winner Miss Gibraltar was overcome with emotion, she said she "had no words" to describe her feelings but insisted she was "really happy".

Interview with the Candidate of Miss Gibraltar 2013 Maroua Kharbouch