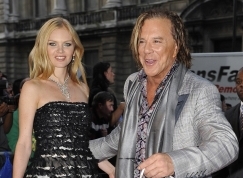 
Mickey Rourke (57) has reportedly proposed to his 24-year-old girlfriend, Russian model Elena Kuletskaya, and they're planning on getting married next year.

Mickey and Elena met earlier this year and have only been dating for a few months. A source said: "They haven't booked a venue or made any solid plans. He just knows he wants to do it in April, and he's been asking what is involved in a traditional Russian wedding ceremony."

Mickey's been married twice before so lets hope the third times the charm.

Tara Reid Is Getting Married (3)