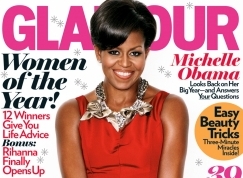 Michelle Obama on the cover of Glamour magazine. Source: Scanpix/AP


She's married to one of the most powerful and charismatic men in the world, but Michelle Obama is adamant that when it comes to dating women should look beyond a potential partner's obvious attributes.

The 45-year-old was speaking in an interview with the U.S. edition of Glamour magazine, which today named her as one of its 12 women of the year. On dating, America's First Lady said: 'Cute's good. But cute only lasts for so long and then it's: "Who are you as a person?"

Michelle advises women to not look look at the bankbook or the title but look at the heart and soul.
'Look at how the guy treats his mother and what he says about women. How he acts with children he doesn't know,' she continued.

'And, more important, how does he treat you? When you're dating a man, you should always feel good. You should never doubt yourself. You shouldn't be in a relationship with somebody who doesn't make you completely happy and make you feel whole. '

Mrs Obama also spoke of the qualities that attracted her to her husband. She said: 'He was always special, you know? He was special in terms of his honesty, his sincerity, his compassion for other people.'

Michelle and Barack Obama, who have two daughters, met in 1989 while working in her native Chicago at law firm Sidley Austin . They have been married since 1992.