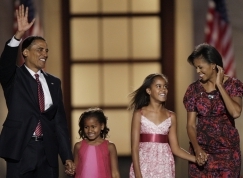 
Michelle Obama started a campaign to tackle childhood obesity in the U.S. on a personal vein - with an admission that her own daughters were becoming overweight before a diet nipped the problem in the bud.

The First Lady said that she had been warned by the family paediatrician that 'something was getting out of balance' with her two children Malia (11) and Sasha (8). U.S. president Barack Obama has also in the past publicly voiced concerns about the habits of their children, saying that Malia had become 'a little chubby'.

'In my eyes I thought my children were perfect - I didn’t see the changes,' Mrs Obama said at an event organised by US health officials. The girls then had to adhere to new ground rules - less burgers, low-fat milk, and fruits and water instead of sugary drinks; the change was significant, she said.

The campaign was launched to deter this problem, and the announcement that Michelle would head it was met with a standing ovation from congressmen and senators. Concerns over obesity has been growing in the U.S. where two thirds of adults and one in three children are overweight or obese, according to experts. US spends nearly $150 billion (£94 billion) a year fighting obesity - more than it spends on cancer and twice as much as it spent on obesity in 1998.