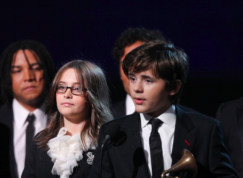 
Michael Jackson's three children have revealed they want to ''continue the work'' of their late father.

The late 'Thriller' hitmaker - who died aged 50 from acute Propofol intoxication in June 2009, just weeks before he was due to embark on a 50-date comeback residency at London's The O2 - began his showbiz career aged just six and his three kids, Prince Michael, 14, Paris, 12, and nine-year-old Prince Michael II, who is known as Blanket, also hope to become performers. Asked what they want to do in the future, Prince Michael said: "I guess continue what our dad was doing."

I guess continue what our dad was doing.

Paris added in an interview with 'Good Morning America' which will be broadcast tomorrow (25.02.11): "I'm thinking about auditioning for a play next week." Michael's brother Jackie - who was a member of sibling pop group Jackson 5 alongside the King of Pop -recently revealed his family joke with the children that they need to "get busy" if they want a showbiz career. He said: "I told the kids, 'You better get busy because when we were your age we were selling out concerts.' "

Jackie also said the three children are constantly asking questions about their famous father. He said: "They are around their father 24 hours a day. They have pictures in the bedroom. They talk about him all the time. They ask me for stories about him. They want to know more about him."