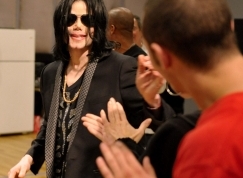 
Michael Jackson's 'This Is It' film came about as "an accident". The documentary was pieced together from private footage of the star rehearsing and was never intended to be released to the public.

Kenny Ortega - the choreographer behind the 50 planned London 'King of Pop' shows said: "The recordings were made so we could use them, then the tapes were destined for Michael's private library. They have a real unguarded honesty to them."

Ortega (59) got many messages from fans around the world asking to see the shows, to see the footage. He eventually realised the journey wasn't over and the documentary had to be done.

It is for the fans and the film will show the development and intentions of the show, and the concert as it moved closer to London."

Kenny also claims Michael amazed the performers he had recruited to join him on stage.
"He had dancers less than half his age - he was 50 years old and still he would have them falling to their knees in amazement of his moves, " he told BBC Radio 1.