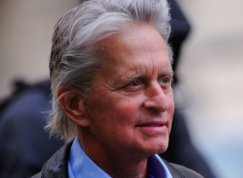 
Michael Douglas‘ friends are allegedly worried the actor will be dead by the end of the year.

Sources say the 66-year-old actor — who’s battling cancer — is growing weaker by the day. “Michael looks like he’s at death’s door already,” a worried insider told American tabloid the National Enquirer. He’s gaunt and has lost more than 35 pounds as a result of chemotherapy and radiation treatments.

“He looks awful. Everyone is worried about him. He can’t eat, he’s exhausted, and he’s in a lot of pain. I hate to say it, but it looks as though he could be gone by the New Year. Michael is bravely trying to keep up is hope of surviving — but there’s little hope for him. All anyone can do now is pray. We’re urging everyone in the world to pray for Michael in the hope that some kind of miracle will save his life.”

The news comes after it was revealed Douglas had been placed on a rich diet of creamy pasta, organic liver and liquidized chicken to help him get back to a healthier size. “He needs to bulk up. He’s so fragile that doctors are worried he won’t be strong enough to recover from treatment which has left him weak,” a source said. “The liver and fats help alkalise the body while the chicken is nourishing. It’s all easy to swallow.”