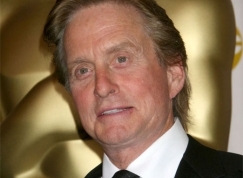 The 'Wall Street: Money Never Sleeps' star - who is currently undergoing eight weeks of radiation and chemotherapy after being diagnosed with a tumour in his throat last month - believes the emotional distress he has suffered in the last several months has been the cause of his illness but he is determined to beat it.

Michael - who has overcome alcoholism and drug addiction in the past -said: "This type of cancer can be brought on by alcohol and tobacco abuse and by a certain type of sexually transmitted reason, but I look at it as stress. I've had a pretty stressful year on a number of fronts, some of which were public and some of which weren't. I've always worked hard and played hard and I'm sure I'll be cleaning up my act in the future. But I'm still looking forward to a good glass of wine when I get my taste buds back. My plans are to lick this cancer but it will probably take four or five months. I've always prided myself on putting as much as I possibly can into everything I do and I'm going to beat this."

Michael's 31-year-old son Cameron was handed a five-year jail sentence in April after pleading guilty to dealing methamphetamine and cocaine, a verdict which devastated the 'Basic Instinct' star. The Oscar-winning actor also revealed he wanted to try and keep his condition secret but once he started having treatment he realised it wouldn't be possible.

The 65-year-old star - who has two children Dylan, 10 and Carys, seven, with his wife Catherine Zeta-Jones - added to the Daily Mirror newspaper: "I wondered if I could keep it to myself, but when I knew what my programme would be - eight weeks of intense radiation combined with chemotherapy overlapping with the premiere - I realised I couldn't. Chemotherapy takes its toll, the more you keep doing it you lose your energy and it gets more difficult to swallow. I'm having a crash course education in just how nasty these cancer cells can be."