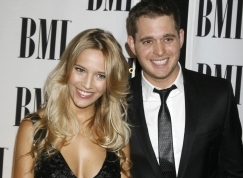 
Michael Buble (34) is not single anymore! The singer reportedly popped the question to his Argentinian girlfriend over the holidays.

"He proposed in Argentina, in front of Lu's whole family," a close pal says. After the engagement, Michael reportedly whisked his fiancé off to Hawaii, where they stayed in a Maui beachfront mansion owned by friends.

The friend says the couple are thinking of tying the knot sometime next year.