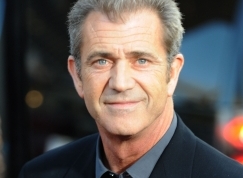 
The 'Braveheart' star's 5ft 9in (175 cm) frame was deemed unsuitable to make a convincing portrayal of the iconic British spy - who is currently played by Daniel Craig - while producer Albert R 'Cubby' Broccoli was also concerned that he was too famous for the role.

Scriptwriter Tom Mankiewicz - who wrote James Bond favourites 'The Man With The Golden Gun' and 'Live And Let Die' - said: "At one point Mel Gibson wanted to play Bond. And Cubby was against it. Cubby first of all had a thing about tall people.

"Bond had to be tall. And so Mel Gibson was too short. But he was a big star."
"Somebody at United Artists said to me, 'Call him and tell him Mel Gibson would be great.' And Cubby said, 'I don't want to make a Mel Gibson movie, I want to make a James Bond movie.'"