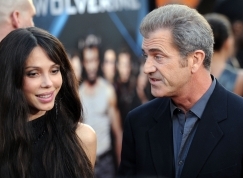 
Congrats to octodad Mel Gibson, who became a father for the eighth time on Friday. Mel's fiancé Oksana Grigorieva gave birth to a healthy baby girl and Mel couldn't be more excited.

According to Hollyscoop, Oksana gave birth a few weeks early but everything went well and mom and daughter are doing just fine. Mel was reportedly worried about Oksana giving birth so soon but as soon as he found out his new daughter was happy and healthy, he passed out cigars to everyone in the waiting room.

Mel's relationship with Oksana started with what seemed to be a scandalous relationship, but clearly they're very much in love and now they're officially a family.

His wife Robyn filed for divorce in April after photos of Mel and Oksana frolicking on a beach in Costa Rica surfaced on the net. Mel has six sons and one daughter with Robyn and Oksana has a son with James Bond star Timothy Dalton.