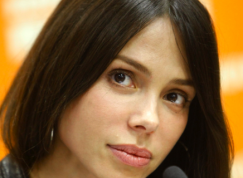 
Mel Gibson's baby mama Oksana Grigorieva isn't as innocent as she wants us all to believe.

Oksana reportedly tried to extort $10 million dollars from Mel in exchange for keeping quiet about their relationship--and of course keeping those tapes private. TMZ's sources say there are emails and other "physical evidence" to prove that Oksana demanded over $10 mil from Mel. As one source said, "There's a long trail of evidence."

Of course Oksana denies releasing the tapes and will pretend she hasn't made a single penny off the tapes--but it's pretty obvious at this point that she's behind them. Mel's lawyers will be meeting with L.A. County Sheriff's deputies, making a presentation of evidence, which includes alleged evidence of extortion. Her lawyers want Mel to be investigated for domestic and child abuse.