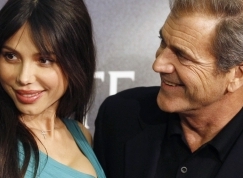 
Mel reportedly admitted he slapped Oksana Grigorieva during an argument one day when she became "hysterical."

According to a declaration dated June 23, 2010 that was filed with Los Angeles Superior Court, Mel said they were arguing on January 6, 2010 when Oksana grabbed Lucia and screamed at him "Stop yelling or you will make her into a retarded brain damaged idiot!" According to TMZ, he claimed he was worried Lucia "would suffer Shaken Baby Syndrome" so he decided to slap Oksana.

He explained in his declaration: "I slapped Oksana one time with an open hand in an attempt to bring her back to reality. I did not slap her hard, I was just trying to shock her so that she would stop screaming, continuing shaking Lucia back and forth. I did not hit Oksana with a closed fist, as she alleges. I did not ever punch her in the face or in the temple or anywhere else, not then or at any other time."

He admitted that maybe slapping her wasn't the greatest idea in the world, but he claims he did it because he was worried for his daughter's safety.