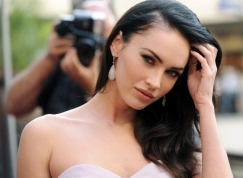 
Megan Fox is not crying over the fact that she is no longer attached to the Transformers franchise.

She has her eyes set on another big franchise. Rumor has it that Fox is very close to inking a deal to star in the new Pirates of the Caribbean movie with Johnny Depp.

“Megan is mulling over a number of big movie offers including another sci fi franchise and a role in the next Pirates of the Caribbean,” a source said. “She would play a mermaid who charms Captain Jack but she has a dark motive...Megan has always loved Johnny and is desperate to work with him."

Megan Fox is beautiful but what has she done besides Transformers? That's really the only big movie she has ever done so Pirates would be a great career move for her.