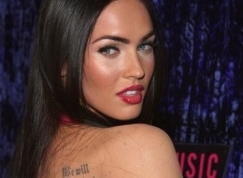 
Sexy actress Megan Fox is the next famous name for posing for Armani Underwear.

Starting in January, the actress will show off her enviable curves in a worldwide print and billboard campaign for Emporio Armani Underwear and Armani Jeans, according to People magazine.

While husband and wife team of David and Victoria did star in some ads together, Megan and Cristiano sadly won’t be teaming up in front of the lens. Check back for more details on the campaign.

So, what do you think of Megan Fox as an underwear model for Armani?