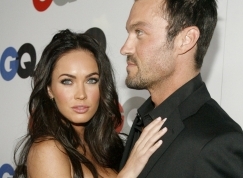 
Actress Megan Fox and her on-off boyfriend Brian Austin Green have reportedly become engaged for the second time after rekindling their five-year romance.

Megan and the former Beverly Hills 90210 star - who called off their engagement early last year - are said to again be planning to wed after Brian revealed his marital status on twitter.

Megan (23) and Brian (36) split last February after five years together, claiming they both wanted to concentrate on their careers. It seems love is still more important for them!