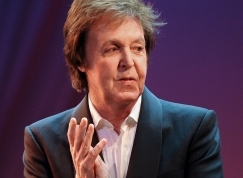 
Sir Paul McCartney's crippling stagefright almost cost him his place in The Beatles in the mid-1960s.

The Hey Jude hitmaker admits he would feel sick because he was wracked with nerves before shows and big events and he contemplated whether the run of fame was worth the nauseating feeling in his stomach after one excruciating experience during NME magazine's awards ceremony in London.

He says, "They used to have a thing called the NME Poll Winners Party, where the owner of the NME would get us, the Stones, all the top acts, to come and perform for nothing! This was a couple of years into The Beatles' career.

"I remember being on the steps of Wembley Town Hall (in London), literally getting ill with nerves, and thinking, 'I've got to give this business up, this is no good'. It was quite nerve-wracking.

"I'm not so bad now. I know I've got a really good band, which helps."