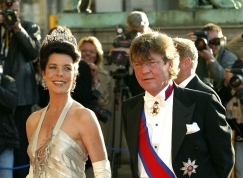 
The already-tumultuous marriage of Monaco's Princess Caroline and husband Prince Ernst August of Hanover appears to have hit a new bump with the publication of photos showing the 55-year-old Ernst August kissing with someone other than his wife.

Thursday's editions of France's Paris-Match show Ernst August and an unidentified woman locked in an embrace. "The Prince and his friend," the publication says, "only had eyes for each other."

The photos raise a new round of rumors concerning a possible divorce action by the thrice-married Her Royal Highness Caroline Princess of Hanover, Duchess of Brunswick and Lüneburg (52) the eldest child of the late Prince Rainier and Grace Kelly.

They also show the latest in a chain of indiscretions that has made the couple's 11-year marriage a royal soap opera starring Ernst August in incidents of public drunkenness, hospitalizations, scuffles, alleged infidelity and one all-too-well-documented episode of public urination at Expo 2000.

The couple – who were seen together on only three occasions in 2009 – have been living apart for some time. In September, photos allegedly revealed the Prince's close friendship with a Parisian socialite. Days later, while Ernst was in Libya celebrating the 40th anniversary of Colonel Khaddafi's reign, Caroline moved out of the family's Fountainebleu home, taking their 10-year-old daughter Alexandra with her and resettling in Monaco.

Jezza 11-01-2010 15:57 That's what we want from our aristocracy! Drinking, fighting, peeing in the hedges and rogering the hired help! Marvellous!
0

From Monaco to Marbella (7)