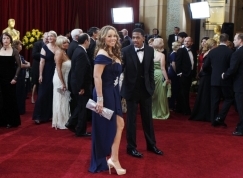 
Here we go again. We've been hearing the rumors for weeks and now it's apparently official: Mariah Carey is pregnant with her first child with hubby Nick Cannon.

A source close to Mariah and Nick tells that the couple, who renewed their vows to celebrate their second anniversary in May, are expecting their first child.

“They’re both very excited and very happy,” dished the insider.  Let's just hope their "insider" isn't the same one that told them Khloe Kardashian is 2 months pregnant, because Hollyscoop confirmed those rumors were false.

But a Mariah pregnancy is certainly a big possibility. She recently dropped out of her next film gig, a role in Tyler Perry's For Colored Girls Who Have Considered Suicide When the Rainbow Is Enuf, fueling pregnancy rumors.

When asked about the pregnancy rumors, her rep said, "She is not doing the movie because her doctor advised her not to. More than that I cannot comment further."