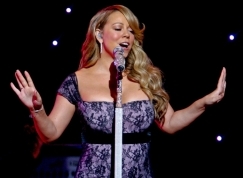 
Mariah Carey is four months pregnant, according to a new report.

RadarOnline says the singer and her husband Nick Cannon are overjoyed at the prospect of becoming parents but have decided not to talk about the pregnancy publicly. “Nick has been telling friends how excited he is to be a dad,” a source said. “Mariah has tried so hard to get pregnant.”

The source adds that Mariah — who has passed the four month mark in her pregnancy — has no plans to announce her good news in the future. “She definitely wanted to get pregnant,” said the pal. “She’s very excited. She wants to wait as close to full term as possible before going public with the news to her fans.”